Video apps for coaches have come a long way in the past few years and are popular for teaching high level movement such as Olympic lifting.

Video apps are so advanced these days that strength coaches use them to train individual athletes remotely or in a team setting. Imagine recording each athlete and quickly running it back for a side-by-side comparison in the weight room. Better yet, think about athletes filming themselves in the offseason and sending the strength coach the video for interaction and feedback - especially incoming freshmen.

With today's technology, this is not only possible, it's pretty easy. Here are the best five video apps for strength coaches:

This new app for coaches is sharp, fast and extremely simple to use. In fact, they are a potential threat to the other barbell technique apps we list in this article if they grow in popularity. Keelo Lift automatically tracks the barbell path and uses a heat-map type graphing to indicate barbell speed which is super sharp. Video is recorded in 60 FPS and stored for easy playback within the app and can also be shared. 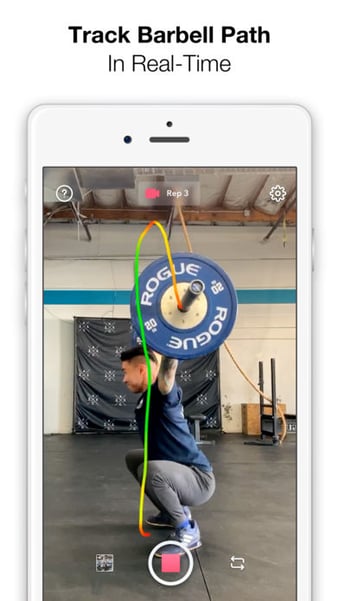 Keelo's free version offers 20 free lift recordings and gives the option to purchase unlimited recordings for a monthly or annual fee. Unfortunately, Keelo Lift is only available in iOS at the moment but will be making an Android app.

It's true - the programming software has delved into the video game (we couldn't help ourselves). In a different twist, TeamBuildr created a video feature that lets athletes record themselves on their own phones, upload to TeamBuildr and coaches can comment/give coaching feedback on the technique from the coach account.

The idea is to have coaching take place in the same software where programming is done, essentially consolidating more strength coaching functions into one platform.

Our third-ranked app is Dartfish which offers itself as a very efficient tool for strength coaches. Dartfish offers a robust editing interface that allows for a lot of markup in addition to playing back video in slow motion. Priced at $6.99, coaches will be going for free apps before trying Dartfish but this company is reputable among the sports community and makes a strong effort to be valuable to strength and conditioning coaches. Available for iOS and Android, give a Dartfish a try when looking to upgrade to a more sophisticated video app.

Ubersense is now Hudl Technique (acquired by Hudl). This app is tremendously popular and used by many Olympic coaches. It films in HD, plays back ultra-slow motion, and lets you diagram/markup directly on the video with the easy-of-use that Hudl is known for.

Perhaps the coolest feature is how you can compare athlete videos side-by-side with professional athletes in the same sport. For a strength coach, this app is just a smooth tool that is backed by one of the most trusted companies in sports technology. Available on iOS and Android.

At $4.99, Coach's Eye is available on any iOS, Android, and Windows device and is our first pick for best mobile video app for strength coaches. This app is able to charge a premium because of the sheer functionality it offers: A coach can actually record their voice as they breakdown and markup an HD, ultra slow motion playback for an athlete.

In addition to frame-by-frame playback, voice-over video and markup, this app even lets strength coaches compare side-by-side videos of two different athletes (or the same athlete).

Previous Story
← Fitness Wearables — The Functional vs. The Frauds
Next Story
Your Guide to Off-Season Training Part 1: Early Off-Season →