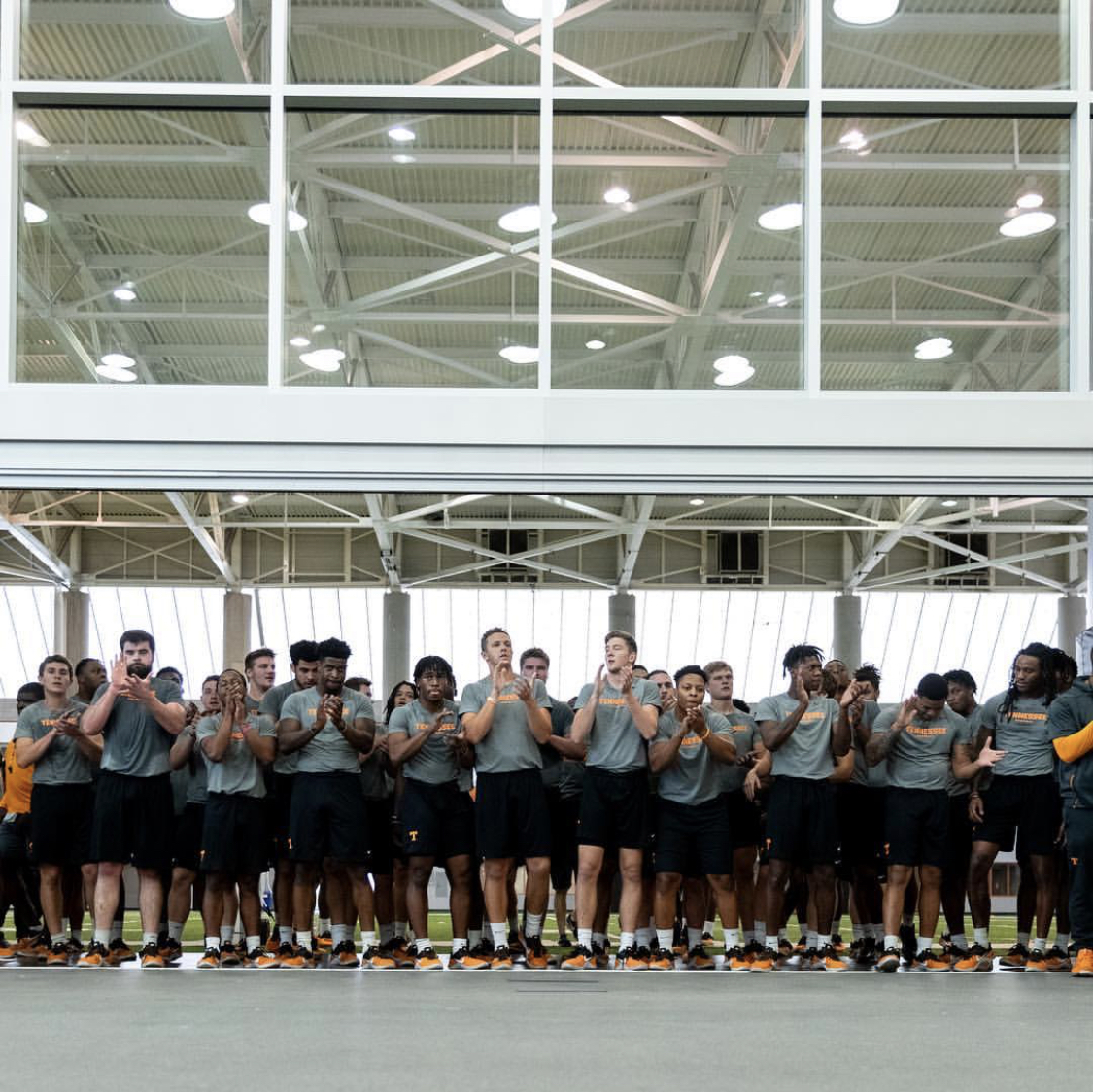 How to "Feed the Cats" For Athlete Success

My strength program is energized. My kids are making gains like crazy. They are faster than ever. How do I motivate athletes? It boils down to one philosophy that we learned from Tony Holler, track coach from Plainfield North High School in Illinois, who has an almost cult-like following in the track and field world. We took his philosophy and ideas from the track and an idea he had for how to apply his philosophy of Record, Rank, & Publish in the weightroom and ran with it.

Let me first explain the path to how we got where we are now. For 17 years, I was a pretty average to below average strength coach. As a young coach, I knew everything and every year I realize I have so much more to learn. It’s taken me that long to learn enough to finally latch on to some core principles and techniques that allow me to feel like I am finally becoming the best version of a strength coach that I can be. Now, don’t get me wrong, I still have a lot of work to do. If you aren’t a life long learner, then I think you run the risk of really getting stuck in a rut and plateauing in your career regardless of what it might be.

So, being someone who is inherently curious and a lifelong learner, I am constantly exploring new concepts and ideas that can help my athletes. As a track coach, I kept hearing about this guy, Tony Holler, and his “Feed the Cats” philosophy which is basically his methodology of minimum dose sprint training at max speed as a method to train sprinters and attract the best athletes or “cats” to his program while recording, ranking, and publishing 1000’s of individual timed sprints. That short explanation barely scratches the surface of Coach Holler’s philosophy. He is transcendent in his ideas about training high school sprinters. One phrase that I think hits the nail on the head in terms what Coach Holler’s does is “More is not better, better is better.”

Now, if you want, you can really go down a wormhole of Tony Holler, the Track Football Consortium, and Chris Korfist speed and training information. They have so much information out there! One of the greatest things is that these coaches especially Coach Holler have been some great at sharing their ideas in presentations, clinics, and on blogs that you can find a lot of great ideas. In fact, the most valuable resource I have found on “Feed the Cats” is this pdf. Coach Joe Stokowski described it to me a Tony Holler “scripture.” I would have to agree!

As you read Tony Holler’s writings, you begin to realize that some of the secret sauce in his recipe for success is data and manipulating that data. I really wasn’t sure how I could apply his philosophy to the weightroom until I read the article, The Origin, Evolution, and Future of Record, Rank, and Publish. I highly recommend that you read the entire article. In reading it, Tony explains that he has had an idea this winter/spring to add a speed cycle in which he tests has 6 workouts that he tests, records the results, ranks them, and publishes them. After 6 workouts, the cycle starts over with the first test again. Coach Holler stated that: “When athletes break records, the hit of dopamine is addicting. We want sprinters addicted to breaking records. In addition, high dopamine levels gives sprinters the ability to sprint faster. The six-workout cycle gives athletes a chance to set six benchmarks and then start breaking records.”

The philosophy of Record, Rank, and Publish is that kids will continually get faster when asked to run max speeds, are timed, and the results are then ranked and published for all to see. Now that isn’t the whole reason why Coach Holler’s kids run fast, but it is one of the ingredient in the special sauce. His data ranked and published serves as a public motivational tool.

Now, at the same time as I was reading that Tony Holler TF Consortium article, I also came across an old article from 1998 Volume 8 Issue 1 of Gridiron Strategies, an older football coaching trade magazine. I try to read those every once in a while. I feel like sometimes what is old becomes new again so it is good to go back and review some of those old coaching articles every once in a while. This article was entitled “Improving Player Performance: In Practice and Games Using Public Posting.” The article was written by two researchers, Phillip Ward and Shannon Smith, whose findings were eventually published in The Journal of Applied Behavior Research. You can find their published results here

Essentially, Ward and Smith worked with an NAIA Division II program in the Nebraska-Iowa Athletic Conference to study the practice and game performance of their wide receivers. First they have the coaches grade the players without their knowledge for three weeks. They found that the players performed with a grade of 70-85% in that time period. They then instituted a “Daily Performance Chart” and “90% Club” and publicly posted the daily grades of the wide receivers for three more weeks. The grades of the players climbed to 90-100% for all those players. They then removed the public posting, and within a day, the performance fell off to previous levels. It was so drastic that the coaches re-implemented public posting right away.

So we see that public posting and recording, ranking, and publishing results of testing can improve performance from the writings of Tony Holler and this Ward and Smith study.

So, how did we apply this in our weightroom and have it energize our culture and our school. With limited space, we could not follow the Tony Holler Speed Cycle. We don’t have an indoor track to use. We have a 40M x 40M square walking track and two gyms which I don’t always have access to. I needed to find a way to help my kids be faster, more explosive, and more agile. I also wanted to see if I could find 4 tests that would be norms-based (so I and my kids could know what a “good” score was) and wouldn’t take up an entire class period.

I decided on this plan to motivate athletes. We would test the 20M Dash one week and the Flying 10M Dash the next week the rest of the year on Friday’s (or the last day of the school week.) I would record, rank, and publish the results in TeamBuildr and post paper copies on my doors. For the Flying 20M Dash we post our scores by these United States Tennis Association Standards for Junior Athletes:

All my kids who score Excellent are listed on the “Excellent” sheet. We also post on our digital strength records display, the fastest 20M times in the school by gender and Top 5 by class and gender.

For the Flying 10M Dash, we post our scores by ranking every student by class and gender. We also include Tony Holler’s method of figuring out the MPH of your sprinter with this formula: MPH = 22.37/(Flying 10M Dash Time)

We also wanted to record, rank, and publish some sort of measure of explosive power and agility. We went with the standard tests that most of you may already use: the vertical leap and the 5-10-5 or pro agility test.

We record, rank, and publish all these scores again like the Flying 10M Dash by grade and gender. The results are entered into every athlete’s TeamBuildr account where I can track their progress throughout the year and in paper form on the door to the weightroom where they come in every day. You can’t run from the results! Everyone sees them. We rinse and repeat this every two weeks. I have 1000’s of data points now. I can easily see the effect of our program on our kids and their performance.

The results have been unbelievable. We started doing this in November and as some of you may have happen, some of our senior boys decided to not take strength class in the spring in order to have a shorter school day. Those senior boys were some of our fastest guys. They were at the top of our leaderboards in December. As our remaining athletes have trained and tested, their results have put those numbers to shame. We just keep getting faster and faster! Now our vertical leap numbers and pro agility numbers have not had such a steep rate of success, but we have seen marked improvement.

Some special considerations if you were to implement this system. First, I recommend that you have a timing system like a FreeLap or Brower system. It will make your life easier. I handtime every sprint and pro agility drill now because I don’t have one. It isn’t 100% accurate and takes more time, but we still get great results. If you don’t have a timing system, I still say you need to take this on! It will be worth the effort. Along the same lines, a Just Jump Mat or Vertec would really help you test the vertical. We don’t have either, so we do it old school with tape on the wall.

Secondly, We stay on schedule as much as possible. We always try to get our testing in. Now, on a day with an assembly where our schedule is short or if all of our kids had competitions the night before then we may not test the vertical leap and 5-10-5 because #1: our training is the most important part of the equation. We don’t want to miss out on the movements that will help improve those scores just for the test. #2: I want to collect results where my kids are performing better than they did before. While that data may be valuable after a competition, my whole goal is that the results motivate the athletes. If they are sore and tired from a sub-state basketball game, then we all know their vertical is going to be not as good that day. I don’t need to test that to know it.

Third, TAKE THE TIME TO COMPILE, RANK, AND PUBLISH THE RESULTS. It takes me at least an hour every day when we test (so every Thursday and Friday) to comb through the results and establish new PR’s (personal records) for the kids and rank those results again. One important note is that we always rank the kids by their PR and not be each individual test each time. I want kids to know their PR and see it all the time so they work to beat it.

Motivating Your Clients During a Pandemic

How To Not Be A 'Soft' Athlete - Part II