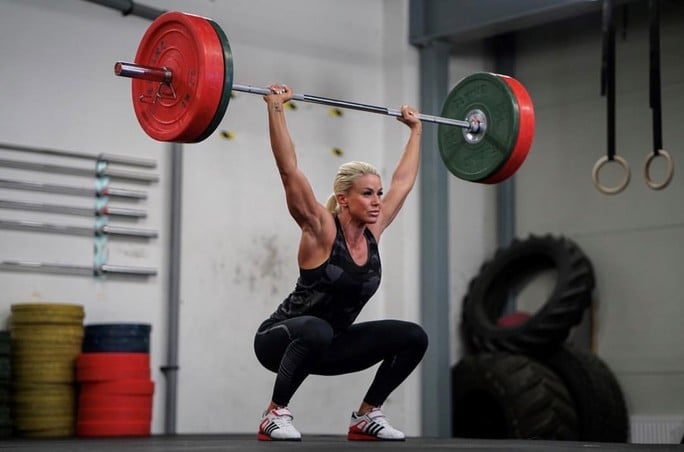 Olympic lifting is awesome. Whether you’re talking about the Clean and Jerk or the Snatch, a well-executed Olympic lift is a thing of beauty. It is an incredible expression of raw human strength and power in one smooth, explosive motion.

It can also be dangerous, if not executed properly. Even professional Olympic lifters can get seriously injured during training and competitions.

Then again, it’s also one of the most effective training tools for athletes in other sports. It helps train maximal strength and explosive power – both of which are critical to success in any sport. You could say they’re high-risk, high-reward types of movement.

Strength coaches that work with high school and youth athletes know that competition is getting fiercer by the year, and in order to have a chance at competing and winning at high levels, their athletes need to be in excellent shape. Many strength coaches know and understand the importance of maximal strength and power, and incorporate Olympic lifting into their programs. But one of the major challenges they face is teaching the foundations of Olympic lifting to 20-30 new athletes and beginners in the one or two hours per week they get to see them in the weight room.

With such limited time and such complicated technique, a lot of strength coaches simply don’t teach these lifts at all – even if they understand the huge benefits they can have.

Well, I work at the National Training Center in Florida, where track sprinters (and world record-holders) like Noah Lyles and Shaunae-Miller Uibo train. And I’m fortunate enough to be friends with Steven Cerenzio, the Strength and Conditioning coach that teaches our Olympians how to safely perform the lifts. He also teaches groups of young girls, aged 8-16, how to Olympic lift on the weekends. He is, without a doubt, the best Olympic lifting coach I’ve met in 12+ years in the industry. And it’s not just his technical knowledge or the fact that he does the lifts himself every single day. His best quality as a coach is his ability to communicate with anyone, and get them to do what he wants them to do – whether that’s an Olympian or a 9-year old.

I asked Steven – how would you go about teaching beginners how to safely do the Olympic lifts?

Check out our interview. He has some great insights and some excellent coaching points to help strength coaches teach the moves more effectively.

Some of the common limitations that beginners often face include mobility issues, core strength, body awareness, and fear.

Often times the ankles, wrists, and shoulders are in need of targeted mobility work to help prepare young athletes for the receiving position (or catch) of the Clean and the Snatch. Cerenzio likes to include this mobility in his warm-ups for his athletes, and suggests strength coaches do the same. Obviously, each athlete has a unique structure to their bodies and needs a specific mobility/movement assessment, but if time constraints force you to paint with a broad brush, the ankles, wrists, and shoulders are a good place to start.

Along with mobility, core stability work can be included in the prep/warm up before lifting to help ensure the athletes can properly brace during the lifts. One of the most common mistakes new lifters make according to Cerenzio, is “shooting their hips” up at the very beginning of the lift, instead of maintaining a consistent torso angle until the bar passes the knees. This can be due to a lack of core control, or poor body awareness. Targeted exercises like single-arm farmer’s carries, hollow holds, and bear crawls can help build this stability while athletes learn the technique.

In terms of body awareness, the bear crawl is one of my all-time favorite exercises. It’s the first movement pattern we use as humans, and performing them can help uncoordinated athletes drastically improve their body awareness and core stability at the same time. It makes for an excellent warm-up exercise. Check out this bear crawl tutorial for how to teach them to your athletes.

As with all things, practice will help to eliminate the fear of the movements. Steven recommends beginners spend time “tracing the lines” of the Olympic lifts while holding a PVC pipe or broomstick, and performing lots of isometric holds in the most critical positions.

Ok, but what exactly do you teach first for Olympic lifting once the mobility, core work, and warm-up is done?

Steven says there are three Olympic lifts for beginners that are critical. The barbell front squat and the barbell overhead squat are where athletes are eventually going to have to catch the weight during the clean and snatch respectively, so they need to be extremely solid before athletes can start lifting heavy. And the hip hinge/deadlift is the starting position and first pull of any Olympic lift, so that needs to be solid as well.

Now before you start any session, it’s super important to answer this question: WHAT ARE WE TRYING TO GET OUT OF IT? This is crucial because, if we know what we’re trying to get out of the session or movement, then we can know how to adapt the movement for folks that are having trouble, or can’t get into the positions yet.

As Steven mentions in our interview, he doesn’t need to give someone a barbell to teach them how to Olympic lift. It’s about the POSITIONS and SHAPES more than anything. As those become better, the introduction to the positions for the Olympic lifts also becomes easier. It’s a form of “tricking” the athletes in to learning the Olympic lifts. As he puts it, “Athletes have YEARS to learn these lifts, and they’re going to need years. You don’t walk in and master it on day one. You’ve got to build a solid foundation first.”

To that end, I put together a simple chart with a handful of alternatives for coaches to use while their athletes are learning the positions. Though it obviously doesn’t have every alternative that exists, it should get you thinking about movements your athletes can already perform that will accomplish similar goals while they perfect the technique of the Clean and Jerk, and the Snatch.

If the purpose of the session is simply to learn the technique of the Olympic lifts, stick with Steven’s advice: Move slow (“trace the lines of the lift”), do a lot of isometric holds in the important positions (shins, knees, hips, catch), and coach the positions. Once the positions and patterns look solid – load them up! But be very aware as a coach – these lifts require constant supervision and engagement. They’re as taxing on coaches as they are on athletes.

For a primer on the actual Olympic lifts themselves - check out these videos from Cerenzio’s youtube channel:

And one of Steven’s final pieces of advice: If you don’t feel comfortable performing and demonstrating the lifts, don’t teach them. If you’re not 100% confident you can effectively coach them, just don’t. Better to have healthy athletes that are playing than strong and explosive athletes that are injured.