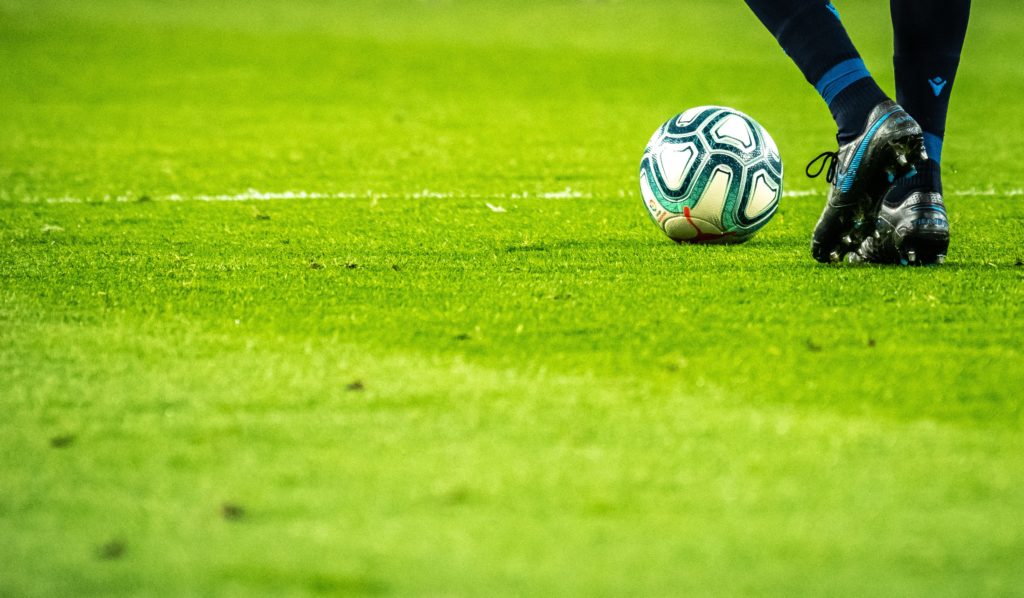 The Case for Implementing Curved Sprinting Into Your Programming 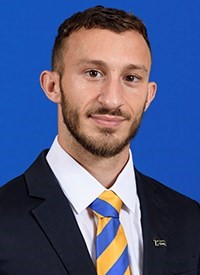 At this point, there should be no question that sprinting should be a main driver of programming for field sports. Sprinting is a major determinant of success in sports such as American football, soccer, lacrosse, field hockey and many more. We can look at examples from many sports to show us that important moments in the game require athletes to run at top speeds. For example, a study measuring 360 goals from a top league in German soccer showed that the goal scorer performed a “linear sprint” preceding ~61% of goals, and the assisting player performed a “linear sprint” preceding ~67% of assists. It is important to note that in this study, “Slightly curved runs without a second acceleration phase were not assessed as change-in-direction sprints but instead as linear sprints.” (Faude et al, 2012)

Currently many coaches divide their on-field training into linear speed and change of direction. 10m, 20m, 40m and flying 10’s are regularly tracked to assess linear speed. Also, “change of direction” are tracked with tests such as 5-10-5, Illinois agility test, and many others. While these two qualities are important to assess and train, there is an important space in the middle of these two that is often missed.

This quality is curved sprinting.

Curved sprinting is defined as a sprint with gradual and continuous change of direction (Filter et al, 2013). In other words, as stated in the earlier study, this is different than a linear sprint, or a change of direction sprint, defined as a very high-intensity run with two distinct and identifiable accelerations in different directions (more than 50° from the initial sprint line). We can differentiate sprints in any way we want, but why is it even important to do so? Are curved sprints really that different from straight line sprints?

Well, one study has shown, that curvilinear sprints and linear sprints are different and independent actions and must be tested and treated as such (Filter et al, 2019). Furthermore, Paul Caldbeck has done great work in identifying the different types of sprinting present in soccer matches. He has shown that curved sprinting consists of 86% of maximum velocity running in soccer compared to just 14% linear. While this is an example in only one sport, it is an overwhelming majority, and should be taken very seriously. Looking at another sport, football, we can all remember examples of a DE with a curved path eluding a tackle, or a RB/QB trying to get to the edge on a toss or option. At the end of the day, stopping the classification at just “sprinting” or “change of direction” leaves out a major determinant of performance. 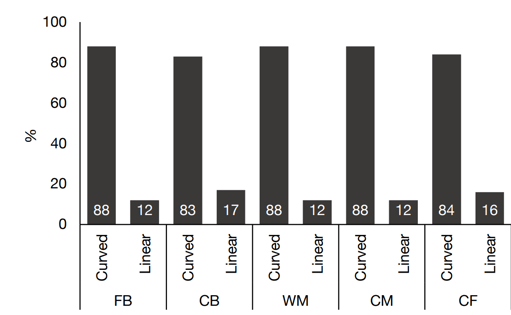 Paul Caldbeck shows the relationship of curved vs linear sprinting in professional soccer broken up by position.

Outside of just the sheer number of sprints that are curvilinear in sport, we can also look at the demands that a curved sprint requires vs a linear sprint. In a study using three-dimensional video analysis, many differences in velocity, step frequency, step length, hip adduction on the inside leg, and hip abduction on the outside leg compared to linear sprinting were observed (Churchill et al, 2015). When comparing inside leg to outside leg, the study also observed significant differences in ground contact time, touchdown distance, hip flexion/extension angles, and hip adduction/abduction angles.

Another study measured the strength of invertor and evertor muscle groups of athletes running on a non-banked, curved track during the pre-season and post-season periods. This study noted statistically significant asymmetrical changes in strength of these muscle groups (Beukeboom, 2000). This is but another example showing the altered biomechanics of curved sprinting’s effects on the musculature. 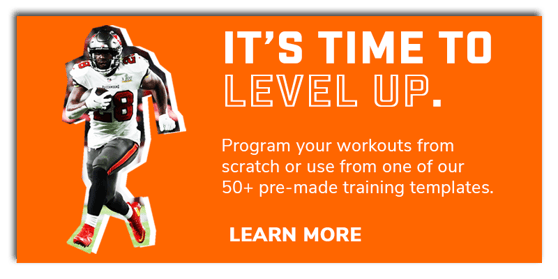 1. “Learn the rules before you break them”

In the Dynamical Systems Theory, these are called “attractors”, and they can be defined as a stable state of organization. Within each attractor region, system dynamics are ordered and stable. This leads to consistent movement patterns for specific tasks. In sprinting, these attractors are often debated, but some of examples are neutral pelvis, hip lock, and swing leg retraction. Whatever attractors you choose in your model, it is important that your athletes can attain these states consistently before adding a “fluctuation” like a curve or a torso rotation.

There is not a better or worse option here, but be sure you know which one you are using and why. As we know, running on a curve reduces speed, so both accelerating on a curve and sprinting on a curve could be used to reduce the physical cost compared to a linear acceleration/sprint. Be careful with this thought, because while the speeds are slower, the biomechanics are altered and could have a different cost.

Example of sprinting on a curve. In this variation, you accelerate on a straight line and then maintain that speed through the curve.

The last thing we will consider in this article is the radius of the curve. Not surprisingly, one study showed that as curve radius shortened, maximal velocities went down (Chang, 2007). In other words, the closer the curve to linear, the faster the speeds that can be attained. This same study also observed that ground reaction forces reduced in the inside leg as radii shortened. This was most likely due to the eversion required at the ankle. This information can be used two-fold. First, we need to be aware of the curve radius’s implications on the ankle. Running a curve at a small radius requires a more aggressive lean in order to maintain balance around the curve. This results in more eversion at the ankle. This should be progressed accordingly. Secondly, because higher speeds can be attained at longer radii, if you are instructing your athletes to run at maximal velocities, know that you can modify the speed simply by shortening the radius. 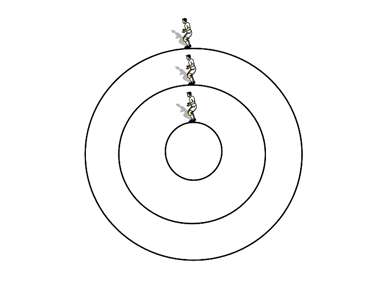 Visual Representation of curve radius and how it will affect speeds. Shorter radius (inside circle) will require deeper leans and therefore illicit slower speeds.

Applying Curved Sprinting into Your Program

Now that we have a better understanding of how different modes of curved sprinting affect the body, it is time to put them into practice. There are a multitude of ways to apply curved sprinting, but all have different goals, costs, and results. This section will show some ways of applying this training and when it would be most appropriate to introduce these methods into an athletes training.

We already established that lower speeds and peak reaction forces happen at sharper curves, so we can use this to determine how we apply and progress this work. These accelerations should be progressed from lower speeds to higher speeds, and from large radii to short radii. While, this is a progression, we can also use combinations of these to elicit specific adaptations.

Using the table above, we can take a look at the 4 combinations of these two variables and interject this type of training where it fits in a macro, meso, or microcycle. For example, a high intensity, large radii sprint could be used to elicit high speed running. Using the tactical periodization model, we can plug each of these variations into a weekly micro-cycle to best match the desired demands. 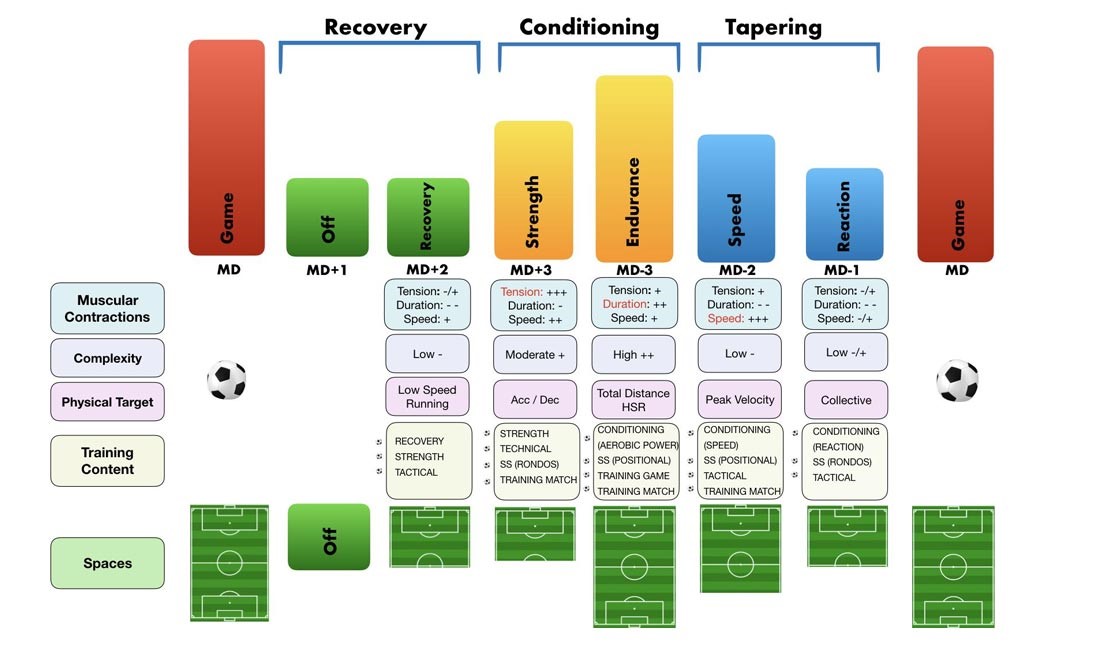 On a game day +2, with the goal of the session still being recovery, this would be the best time to add large radii/low intensity curved running. This is due to the physical cost being low on both the musculature as well as the foot and ankle complex. Keeping the speeds <60%, and the curve wide allows you to work on technique of curved running while still keeping recovery the priority. With the S-Curve sprint, you can keep the velocities low and work on the technical aspects of sprinting on a curve. This fits very well into recovery based days.

On GD-4, the goal of the session physically is to elicit more accelerations and decelerations and to do so with higher density. This makes high intensity/short radii the best selection for this day. With the high physical cost already being applied to the foot and ankle with the smaller spaces, it makes the most sense to apply this method to overload these qualities.

Due to the large spaces, and therefore large volumes of high speed distances that are elicited through practice on these days, isolated sprint training is rarely applied here. If it were to be applied, I would choose between low intensity/large radii, and low intensity/short radii to give a stimulus, but not overload the musculature used in sprinting as the volume tends to be enough from practice

The best method to apply here is undoubtedly high intensity/large radii curved sprinting. This is because we are looking to prepare the body to reach very high speeds during this session. The large radii allows for athletes to reach near maximal velocities compared to linear sprints, but make the sprint significantly more contextual to their sport (in soccer for example). One thing to note here, if maximal velocity and high levels of high speed distance have already been achieved throughout the week, this could be a space for high intensity/small radii sprints to still prepare the body to sprint in training, but to reduce the speeds that the sprint musculature is exposed to during the large radii training. Large radii sprints as well as sprints where you accelerate before the curve will be great ways to elicit high speeds while on curves.

Curved sprinting is undoubtedly an important piece of training that we should all take into account for field based team sports. There are many different modes and methods that we can apply to get the desired results, and this is where it is up to the coach to determine what is right for his or her team.

At the end of the day, this will likely be a new stimulus to your athletes. Be conservative in its introduction, but not afraid. This is a skill that they likely have been performing for years. Just like any other skill, our job as coaches is to take it from where it is currently to a higher level.

Gassers Are Out. Energy System Training Is In.