Scott Cochran's Record-Breaking Contract is Good For All Strength Coaches

Unless you live under a rock then you may have heard about the blockbuster contract awarded to Alabama Football's Head Strength Coach Scott Cochran.

He will now be earning $525k per year - more than enough to live nicely in Tuscaloosa, wouldn't you say? The coach who become famous for his incoherent yelling was even featured on straight-faced CBS 60 Minutes. Saban calls Cochran his "secret weapon" and Kirby Smart tried to poach him with a juicy salary when he left for the head job at Georgia. You heard that right - an SEC head coach was poaching a strength coach! Not an Offensive Coordinator, not a Head of Recruiting - a strength and conditioning coach!

There is no denying the effectiveness of this guy. If you dare to say he's overpaid then you are in an extreme minority and you have already lost that argument due to the fact that no one is overpaid if they are actually getting paid that amount. However, there is a larger argument here for the greater strength coach community: What does this mean for the other coaches in the strength and conditioning industry?

Well here's the hot take: This is good for all strength coaches at any level, in any sport.

There's already been a few rebuttals to this stance and we'll address them now:

This means that an arms race will take place in paying the "next Scott Cochran" (similar to how head football coaches are paid in the Power 5). This is already happening in a way; just recently FSU announced a $362k/yr. salary for Vic Viloria making him the 6th highest paid strength coach in CFB. By any means, this is not a wrong argument - it's 100% true. The Power 5 football strength coaches should be toasting champaign at the announcement of Cochran's deal. These guys will most likely be getting raising if their teams meet expectations come time for contract renewals.

But this doesn't necessarily mean that other strength coaches won't benefit either... more on that later.

For a money-generating powerhouse football programs like Alabama, this is essentially "back pay" for their success so far.

Did the waterboys at Alabama also get raises? Don't think so. This is not Wal-Mart rewarding every single employee for overall company success - this is college athletics and there's a line out the door to take any job within the program. ADs are not exactly paying top dollar... unless it's blatantly obvious that someone should be. Cochran's contract is a way above the industry average compensation because of the work he is doing within his job role.

Keep in mind that similar football dynasties did not feature the celebrity of their strength coach quite like Scott Cochran has been featured. A barrier definitely has been broken with this guy. And we don't know what this will mean exactly for future strength coaches BUT there will inevitably be more attention paid to the strength coach position. If things keep going like this, the strength coach role will become a larger piece of the puzzle in any competitive program.

OK, here's why all strength and conditioning coaches will benefit from this:

1. At the end of the day, Scott Cochran is still a strength coach.

If you tear down this situation to its fundamental parts: A team has had massive success and certain components of that success (ie: coaches) are getting valued via their salaries. But wait, we're not only placing valuations on people here; we're also placing a valuation on the profession. In addition to Cochran's salary, Alabama has made huge investments into the strength and conditioning program by boasting one of the best facilities in the nation. It's obviously more than just a person or staff - at Alabama, there is a serious commitment to the S&C program as a whole.

In Cochran's case, they are probably paying the person first and position second - BUT that still has placed a massive valuation on the strength and conditioning coach as part of the formula for success. The amount of money being awarded to the strength coach here is validation for the industry as a whole.

This may be the most important point here. Head coaches are notorious for copying what they perceive as being formulas for success. Few head coaches have experienced the success that Nick Saban has, and when Coach Saban says things like "I value Scott Cochran just as much as a coordinator" then you know that is ringing some bells for sports coaches at ANY level of play.

3. Negotiation leverage will bring pay raises to all levels

Inevitably coaches will benchmark against their highest contemporaries creating a trickle down effect for that position. This is similar to how CEO pay has behaved - once pay increases for the rainmakers at the top of the profession, the position's average salary will follow suit.

Coaches at the moment are overworked and underpaid relative to the hours of the job. However, hourly pay will contribute less income in the long run compared to salary. With the new Fair Labor Standards Act, strength coaches will most likely get an exemption that prevents schools from being forced to pay over-time.

That's a good thing. For many strength coaches, school would rather cut back on hours or eliminate the position rather than give such an immediately drastic pay raise. However, if strength coaches can be exempted and maintain salary pay, the ceiling for earnings becomes much higher!

In the long run for strength coaches, giving up hourly pay will undercompensate the position at first BUT the long-term potential for earnings is much higher. That's why coaches should be celebrating large contracts and not marginal $.50/hr. pay bumps.

5. The middle-career strength coach is due for a salary upgrade anyway.

A salary ceiling that continues to be pushed upwards will be especially meaningful for the coaches who are in the middle of their careers. Unfortunately, the pay increase for strength coaches is minimal from between 10 and 20 years experience. In any other industry, these would be the years for large gains and big promotions to mid-level executive positions - but not for strength coaches. 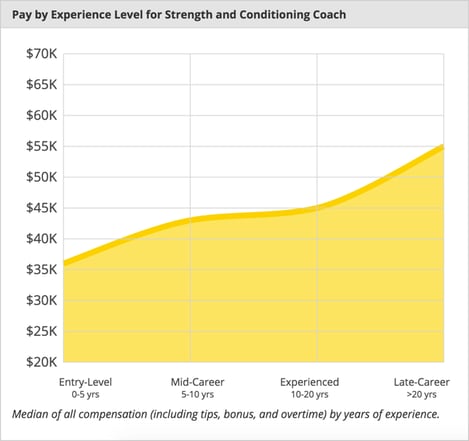 This pay gap is not up to par with other salaries and is most likely ripe for impact. Perhaps large contracts and publicity for celebrity strength coaches will be the factor that straightens this curve out for mid-career strength coaches.

Without a thorough collection of research into the economics of strength and conditioning compensation, no one will never really know what the future will hold. However, we can almost guarantee that a profession with top earners making large gains in salary will not be a bad thing for strength coaches.

The industry as a whole should champion record-contracts like Cochran's in hopes that it will echo in the sports world and bring more attention to a profession that is often overlooked, undervalued, and underappreciated. We believe things are looking up - just keep tweeting when you see those big $$ numbers pop up!

Previous Story
← TeamBuildr 4.0 is here
Next Story
What Strength Coaches Should Be Doing in July →