Ryan takes a sip of fluorescent colored liquid from his gallon jug and wipes the sweat from his forehead.

His iPhone pings as an incoming text message lights up the screen.

“Yo. I was just at GNC and this guy tried to sell me on essential amino acids (EAAs)…claimed they were better than BCAAs. What do you think?”

He clicks the screen off and takes another sip out of the jug. A few seconds later he mashes the home button and his fingers fly over the keys.

“Yeah, there’s some solid data suggesting that EAAs (essential aminos) may be more beneficial in the long run. BCAAs may still have a place in some populations though...”

10 seconds later he hits send and resumes his workout with another set of front squats.

Maybe you’re like our friend Ryan from above and you’ve been sipping the BCAA Kool-Aid for quite some time. Maybe you’re new to the supplement game and all of this seems way over your head.

Either way, it’s important to have a basic background on both supplements as we examine the current research on the subject.

Branch chain amino acids (BCAAs) are 3 of the 9 essential amino acids present within humans. BCAAs comprise a great deal of skeletal amino acids and thus, they are often consumed in supplemental form. Traditionally BCAAs have been used in clinical settings to treat patients who were critically ill with systemic issues such as sepsis, burns, or massive trauma (DeBandt et al. 2006).

However, in more research years BCAAs have garnered quite a bit of attention as one of the 3 amino acids in the formula (leucine) has risen to the top with numerous studies promoting its role in muscle growth via the mTOR pathways.

But, it’s important that we don’t get too caught up in the biochemistry of particular pathways. Think of mTOR like the keys to a car - you’ve got to turn the key to make the car run but you need gas (i.e. all 9 essential amino acids) in order to make it move (i.e. build muscle). We’ll get to more on that later, for right now I’m merely trying to paint a preliminary picture.

Over the course of the day you fluctuate within a zone known as ‘Net Protein Balance’. This is essentially a combination of muscle protein synthesis (MPS) and muscle protein breakdown (MPB). When the two are summated, you get net protein balance (NPB) - i.e. your body’s current metabolic state. That state can be either positive (growth) or negative (breakdown) depending upon the availability of protein (i.e. amino acids).

More simplistically, it would like this: MPS - MPB = NPB

For you visually oriented chaps, have a look at this schematic which will break things down a bit more. 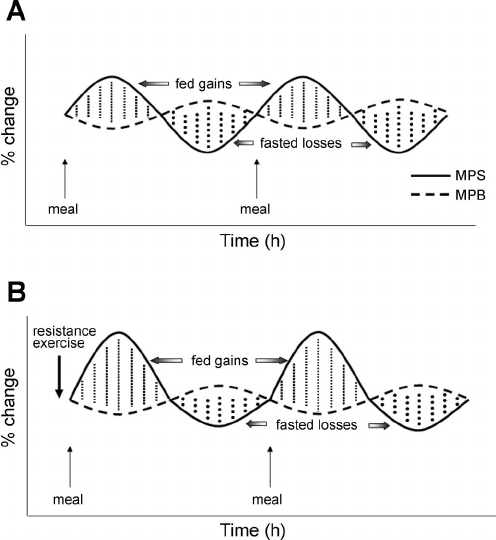 If you have protein or amino acids circulating within your blood stream (especially during training), then your system won’t have to pull amino acids from other muscle tissue to synthesize new muscle. In other words, if you’re training chest really hard in a fasted state, the amino acids needed for growth and recovery might have to come from an unworked body part, such as your legs.

While it’s not necessary (nor ideal) to completely eliminate muscle protein breakdown (MPB), reducing catabolic (i.e. breakdown) activity after training might not be a bad idea if you’re looking to recover as quickly as possible.

Skip the Science, Just Tell Me What I Need to Know

Now, if a watch needs all 9 gears to function, will it still function if only 3 gears (amino acids) are present? Perhaps, but the function and efficiency of the watch will be greatly impaired.

In that example, the watch is MPS (muscle protein synthesis - the process needed to grow new muscle) and its "efficiency" via the number of gears is essentially how much growth takes place after the ingestion of a particular nutrient (BCAAs vs. EAAs in this case).

Long story short, BCAAs may be able to start the growth and recovery process but you need all 9 essential amino acids in order to allow the “watch” (MPS) to function at its full potential.

So, Then Who Needs BCAAs?

BCAAs could be of benefit in elderly populations who struggle with a phenomenon known as “anabolic resistance”. Recent research has shown that muscle growth in older populations may not be as sensitive to protein ingestion compared to younger individuals.

Thus, you could hypothetically bolster a meal with additional amino acids from BCAAs (especially leucine) as some research has shown this can help to enhance the signaling response needed for growth when insufficient protein is present. (Churchward-Venne 2012)

Also, in the case of vegans or vegetarians, BCAAs may serve a role given the fact that plant based diets can be somewhat low in the essential amino acids needed to stimulate growth and recovery. Typically, non-meat based eaters will seek to combine different plant proteins (e.g. rice and beans) to produce a “complete” amino acid profile within a meal.

However, if someone consumes a meal with an inadequate amount of total protein, adding additional leucine (via BCAAs), or essential amino acids has been shown to enhance the cellular response needed for growth.

“In summary, a low dose of whey protein supplemented with leucine or all other essential amino acids was as effective as a complete protein (WHEY) in stimulating postprandial MPS; however only WHEY was able to sustain increased rates of MPS post-exercise and may therefore be most suited to increase exercise-induced muscle protein accretion.” - (Churchward-Venne 2012)

However, make sure to take note of the last line from above: “only WHEY was able to sustain increased rates of MPS (muscle protein synthesis) post-exercise.” In other words, if you want to keep MPS firing on all cylinders after exercise (aka the most crucial time for growth and recovery), then you probably want to choose a product which contains an abundant bolus of all 9 essential amino acids (e.g. whey protein - NOT BCAAs).

Remember, your best bet to keep the “watch” (growth) ticking efficiently is to ensure all the constituent gears (amino acids) are in the right place at the right time.