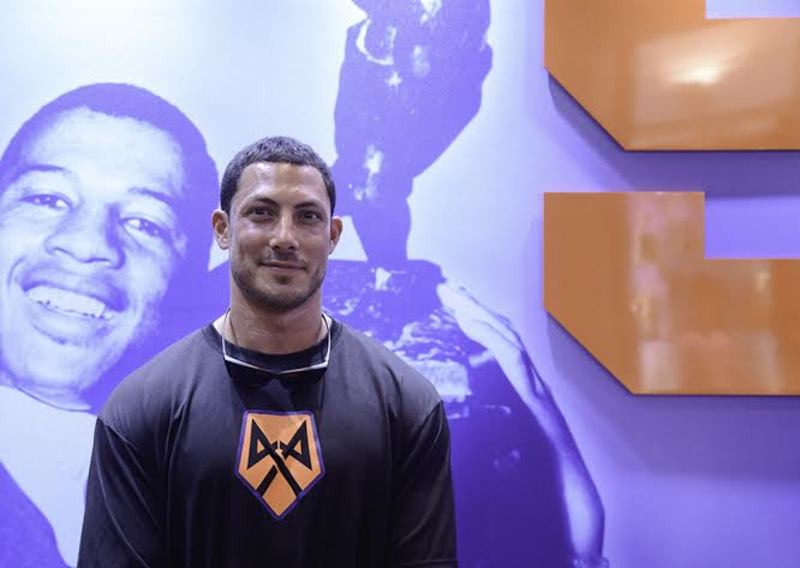 Ryan Nassib called him “Muscles Marinara.” Hal Luther dubbed him “Muscular Matt.” To Will Hicks, he was simply “Muscles.”

Matt Mancz says his current nickname, Muscle Matt, is a mixture of all three.

First it was just the football team that called him that. Then men’s and women’s lacrosse followed suit. Muscle Matt isn’t just a nickname anymore, it’s a title that is both a product of his own physique, as well as the respect he’s earned from the athletes and staff at Syracuse since joining as a full-time as the assistant strength and conditioning coordinator.

“It’s like being called ‘Coach,’” said Dan MacNeill, Mancz’s football coach at State University of New York-Cortland. “Who gets called ‘Coach’ is the guy who is usually revered and knows what he’s doing. He’s in that domain.”

Mancz was an intern with Luther, SU’s director of strength and conditioning at the time, in 2012. Though Mancz was mostly in charge with setting up and cleaning up the gym, Luther said Mancz’s attention to detail helped him stand out in a way that very few interns had in Luther’s 17 years with the Orange. He meshed well with the players and fit into both Luther and Hicks‘ — Syracuse’s current assistant athletic director for athletic performance — mindset.

Now with Luther occupying a similar job with the Buffalo Bills, Mancz has stepped into a full-time role with Syracuse. In July, he was promoted to the athletic program’s top strength and conditioning assistant, and has since used his connection with the players to develop new training regimens with different individual players.

“I (was an intern) purely for the experience,” Mancz said. “It was something I really enjoyed doing, but I really didn’t think I’d be back here a couple years later as a hired assistant strength coach.”

After Mancz’s internship ended in May of 2012, he went back home to Levittown, New York, to live with his parents without much of a plan. Mancz worked as a personal trainer, but spent much of his free time sending out resumes and cover letters to different schools, trying to find a place where he could replicate the experience he’d had at Syracuse.

But when Luther was forced to get a hip replacement before the start of Syracuse football training camp in 2012, he needed someone to fill in for him.

“I said, ‘I can’t pay you, but I’ll try to find you a part-time job and we can give you meals during training camp,’” Luther said of his conversation with Mancz.

On paper, Mancz was a volunteer. He didn’t make money and he didn’t hold the same stature that Hicks had as a 12-year veteran of Syracuse at the time.

But Mancz shifted into a different role. While Hicks was a father figure to many of the players, Luther said, Mancz was more of an older brother.

Luther said when Mancz first started, he was quieter. He worked on learning the tendencies of the players and building relationships with them, which allowed him to work well with the younger players.

It was Mancz’s job to notice the players that didn’t get noticed.

“People on the other part of the athletic staff never realized he was an intern or that he was volunteering at the time,” Hicks said. “They all thought he was an assistant coach. The way he goes about his business, you wouldn’t know the difference.”

After Mancz became a full-time employee, he started to not hold back on the players.

Senior running back Adonis Ameen-Moore said that Mancz had to earn everyone’s respect. For Ameen-Moore, that happened when Mancz suggested he switch to working out on the Stairmaster instead of the bikes and treadmills. Ameen-Moore slimmed down prior to this season, and credits Mancz for that.

In addition to assisting the football program, Mancz has also taken on the primary strength coach role with both the men’s and women’s lacrosse teams.

“Matt paid attention to those details.”

Mancz isn’t afraid to push players, yet being able to speak up, change regimens and get a nickname is a product of respect earned.

The name Muscle Matt is playful. He chuckles when he hears it. “Matt” replacing“marinara” in his nickname is just one more sign of the lasting influence he’s left at Syracuse, just two years out of college himself.

“A lot of people try to tell you how much they know or how smart they are or how many books they wrote or how much they can lift or any of those kinds of things,”Luther said. “An athlete doesn’t care about that. They want to know: what you are going to do to help me get better?

This is not an original post and was re-published from Sam Blum and The Daily Orange.