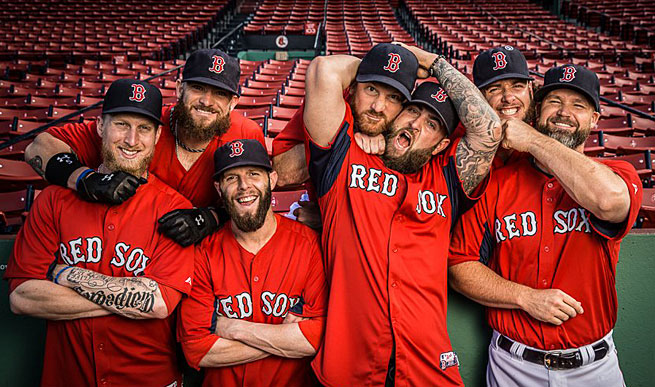 If you didn't notice the Boston Red Sox are in the World Series this year, maybe you did notice their barbarically impressive theater of beards. And as far as the American public is concerned, the collection of face-fur is nothing short of awesome and, even among non-baseball fans, the stunt is serving as the center of sports conversations.

This Boston squad's popularity is soaring above the likes of the clean-cut, older Yankees and the "unwritten rules" abiding Atlanta Braves. Collectively, the three teams are the most popular in baseball. But with the Red Sox parlaying the fact they are good with their incredibly likable image, there is no question who the real winner is between the three this year.

So, this raises a question: Does the MLB have an image problem? But, not that kind of image problem. Actually, we're talking about the opposite of that. There is a growing consensus that the MLB needs to appeal to a wider, younger audience. In a sport hamstrung by lack of action, league execs could learn a lesson from the Sox. After all, it would be good for business - have you seen the media storm surrounding the beards?

Does Sports Have an Image Problem?

It's not just the MLB that is image-conscious, the NBA implemented a mandatory dress-code that is punishable by a fine if broken. The NCAA prevents writing on eye-black and wrist tape.

Some coaches prefer to wear shirt and ties on the sidelines and many teams even wear shirt and ties to the stadium. This is out of an understanding that a player or coach should look nice out of respect for the game or to insinuate that the sport is business, not a game.

But is this being overplayed a little? Is there a correlation between dressing formally and winning?

The Red Sox are teaching us a good lesson: that fans love personality and expressions of individuality. And because the MLB is so well-behaved, we think it can afford a little more individuality. For instance, the NFL had 48 arrests in 2012 compared to only 8 in the MLB.

Allowing baseball players to do more, and marketing it to the public, would be a big boost to the league's popularity.

What do you think - are the Red Sox a good reason why the MLB needs to loosen up or do you think maintaining the current image preserves tradition?

Previous Story
← Is There A Primetime to Workout During the Day? The Answer May Surprise You
Next Story
The Importance of Motivation In the Offseason (With or Without a Strength Coach) →