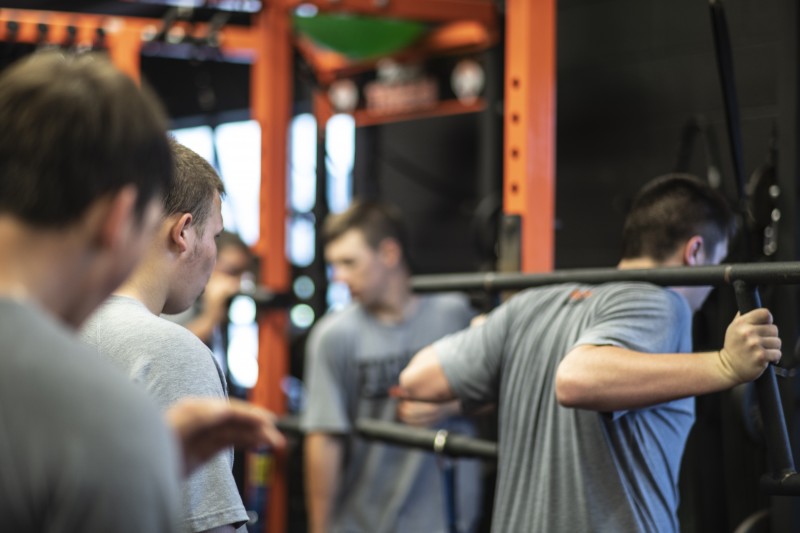 APRE and High School Athletes - What You Need to Know

Exercise programming and periodization for off-season and in-season training play a huge role in the desired outcomes that a strength and conditioning coach wants to see in their athletes.

Strength coaches should be well aware of Newton’s third law, “for every action, there is an equal and opposite reaction.” In athletics, force production is crucial because an athlete who produces more force is often at a better advantage than his or her opponent who produces less force. Think of running economy, if a greater force is put into the ground there will be longer stride length as well.

With this in mind, strength coaches must have their athletes improve the general abilities in order to help improve more specific abilities. This is where APRE comes in.

Autoregulated Progressive Resistance (APRE) has been around since the 1940s when Dr Thomas DeLorme created the methodology to help rehabilitate injured WWI servicemen. APRE is a form of strength training that focuses on holistic athletic ability and weekly performance variance. What makes APRE great is that it takes the effect of external factors on an athlete into account (sleep, nutrition, stress, previous workouts, etc.) and is built to help improve overall athletic performance, not just one lift at a time.

There are three established APRE protocols:

Why should high school coaches use APRE?

In my experience at Nova Southeastern High School, we’ve seen and continue to see improvements in our athlete’s maximal strength and power outputs from implementing the APRE 3RM protocols in and out of season.  For example, one of our men’s hammer throwers increased his front squat by 60 pounds in-season while also improving his vertical jump height as a result of the program.

“Traditional percentage-based programs have long been the basis of training. Coaches utilize testing results to pre-determine the volume, load and intensity of a training session. Depending on the desired training outcome, prescribe a specific training load based off of the 1RM of a foundational lift (Bench, Squat, Clean, Deadlift, etc).

Utilizing a percentage-based approach provides some benefits to coaches and athletes including:

However, there are a few disadvantages of relying on percentages of 1RM testing, including:

Research by Bryan Mann has supported the established protocols for APRE training as APRE3, APRE6 and APRE10. APRE3 is used for developing power, APRE6 for strength and APRE10 for hypertrophy.

The general APRE protocol has the athlete perform 2 warm up sets at 50% and 75%. Set 3 is a rep to failure set at the prescribed RM (3RM, 6RM or 10RM) load. A fourth set is then adjusted depending on the performance of Set 3.  For instance, if an athlete performs 8 reps during Set 3 in the APRE6 protocol, Set 4 load would be increased 5-10lbs and another set of reps to failure performed.  The athlete would then have set a new RM load and it would be adjusted up to that new number next workout.

What we have found in using this general protocol is that our high school athletes do not perform well when forced to failure.  Recovery from sets to failure is difficult and form is constantly challenged. In a large group setting, we found it difficult to hold to our movement standards when training to failure.  Therefore, we have made a few adjustments to the protocol that better fit our limitations and our athletes. 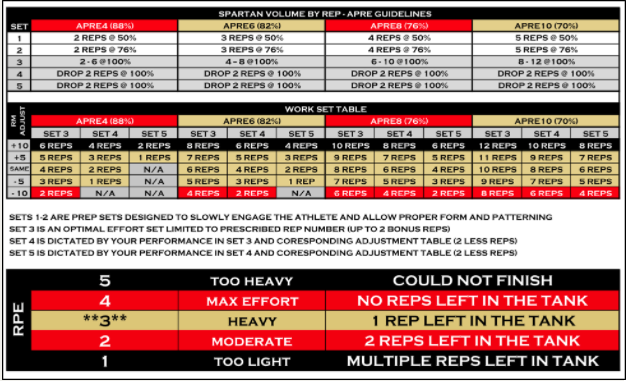 Coach Mark Watts has written two fantastic articles including Individualization in a Team Setting on elitefts.com if you are interested in additional variations as well as some in-season modifications.

With the integration of technology into our weight room this year, we have included the APRE system and protocols into the TeamBuildr platform. Our athletes now simply perform the weights directed to them on screen without having to do the math to determine warm up and working loads. Sets 3-5 allow the athlete to enter rep adjustments up or down and the system automatically adjusts the RM for the next workout depending on how well the athlete performed that day.

By utilizing TeamBuildr, we have saved 2-3 minutes per station as athletes no longer have to utilize charts and percentage calculations.  This increase in usable time has allowed us to now include an Off-The-Script (OTS) set as a finisher.  Our athletes now perform a 6th Set by decreasing the load 10% and attempting to complete 2 more reps than were completed during set 3.  Using the above example, the athlete would drop the load from 245lbs to 220lbs and attempt up to 10 reps.  Technology is not just all bells and whistles, it allows for a greater application of training.

Finally, the technology platform also generates reports and graphics that can be run weekly and monthly to observe trends and manage goals.  This has increased the level of buy-in from our athletes and increased commitment to the program.

"One of the great things about the APRE system, other than the strength gains we have seen is that it provides a built-in form of competition. Our kids get fired up about getting the most reps and love when they can add 10# because they got enough reps”.

Our Head Football Coach breaks our team into groups that compete in what we call the Indian Olympics. He agreed to award points per rep on our APRE days so the kids get even more fired up about maxing themselves out. I run a report each week on our exercises and calculate reps and award the teams the points they earn.

Last football season we had our Freshman and JV teams working on a developmental APRE system and saw nearly 10 kids improve their squat by 50+ pounds in-season! What’s more impressive is that those teams combined record was 15-1 and we had a decrease in injuries in that age group from the year prior. We had one freshman running back increase his 3RM Back Squat from 225 last Spring to just last week he did 405 for his 3RM (BW 235 lbs).”

How Can High School Coaches Get Started Using APRE?

Getting started with APRE is simple. A great starting point is purchasing Bryan Mann’s book, “The APRE: Scientifically Proven Fastest Way to Get Strong.”

From there, I would encourage coaches at the high school level to make sure that their athletes are prepared from a physiological and technical standpoint. Once they’re ready, the coach should be able to implement these protocols in a safe and effective manner.

Last but not least, if you want to automatically build and program APRE into your team’s training, check out how to do so using TeamBuildr.

These Stories on Interviews

Is Starting a Strength + Conditioning Program From Scratch a Good Career Move?