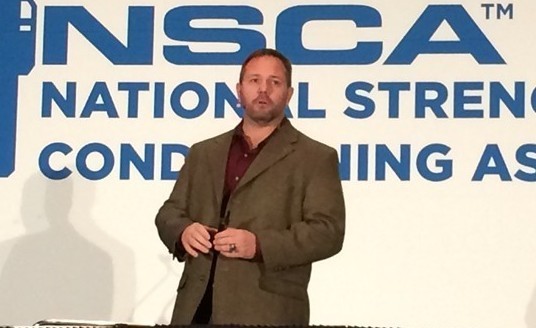 A 24-year veteran of the strength and conditioning industry, Scott Bennett has not only been training Radford's student-athletes, but strength coaches across the country.

From Jan. 8-9, Bennett, an Emeritus-level member of the National Strength and Conditioning Association (NSCA) coaches registry, spoke in Louisville, Ky., at the 2015 Coaches Conference on the topic of training student-athletes in transition. The study, which was first conceived back in 2000 and addressed in 2009, explored the issues student-athletes face in the weight room coming off a natural break, illness or injury.

"With the evolution of training across the board in all universities in the United States, the big issue now is the recovery aspect and being able to use recovery modes effectively," said Bennett. "There is a recognition of that void in the NCAA. We need to maximize our resources."

Common methodologies used in training recovery include cold therapy, heat therapy and soft tissue therapy. What trainers and strength coaches alike are adding to the mix of ice baths and foam rolling is nutrition. Using this combination and making resources available is allowing strength coaches to safely guide the return of student-athletes to competition following gaps in training.

Those gaps in an athlete's training regiment can cause issues that may not always be thought about when returning to the weight room. As Bennett explained, there are hidden dangers in taking time off. Those dangers can surface if not properly guided back into training, and great physical distress can come as a consequence.

"Common things that we can control are sickle cell trait, exertional rhabdomyolysis (the breakdown of muscle from extreme physical exertion) and heat illness," Bennett said. "The key is to know how to keep these student-athletes out of dangerous situations. We take into account if it was a natural time out, illness or injury, and we then address different things from there."

Bennett, now entering his third year at Radford, has helped the Highlanders learn and adapt their routine to maintain safe, effective methods in a student-athlete's development. One of the biggest steps in this process Bennett outlined was the relationship and constant open communication between the athletic training staff and the strength coaches.

Along with new recovery techniques, the industry of strength and conditioning has been undergoing a change in ideals from a sport-specific mindset to that of movement and energy specific training.

"For a long time we got lost in the notion of having sport specificity," said Bennett. "Now, in the last five years, we have really come to terms with more movement specific attitudes than sport specific. When it comes down to it, a lot of sports share a lot of different movements. Everybody jumps, everybody explodes and everybody sprints. You need to be able to recognize each sport's movement and train them at the correct volumes."

Bennett has risen to the top of the strength and conditioning field, being accredited as a Master Strength and Conditioning Coach by the Collegiate Strength and Conditioning Association (CSCCa) in 2006, an honor that at the time only 61 others had attained in the world. He was elected to the CSCCa Board of Directors, a position Bennett served for two terms. His involvement with the association allowed him to be chosen as the first strength coach to be invited as an ex officio member of the NCAA Committee for Competitive Safeguards and Medical Aspects of Sports, where he utilized his time serving to collect data and research to better the industry.