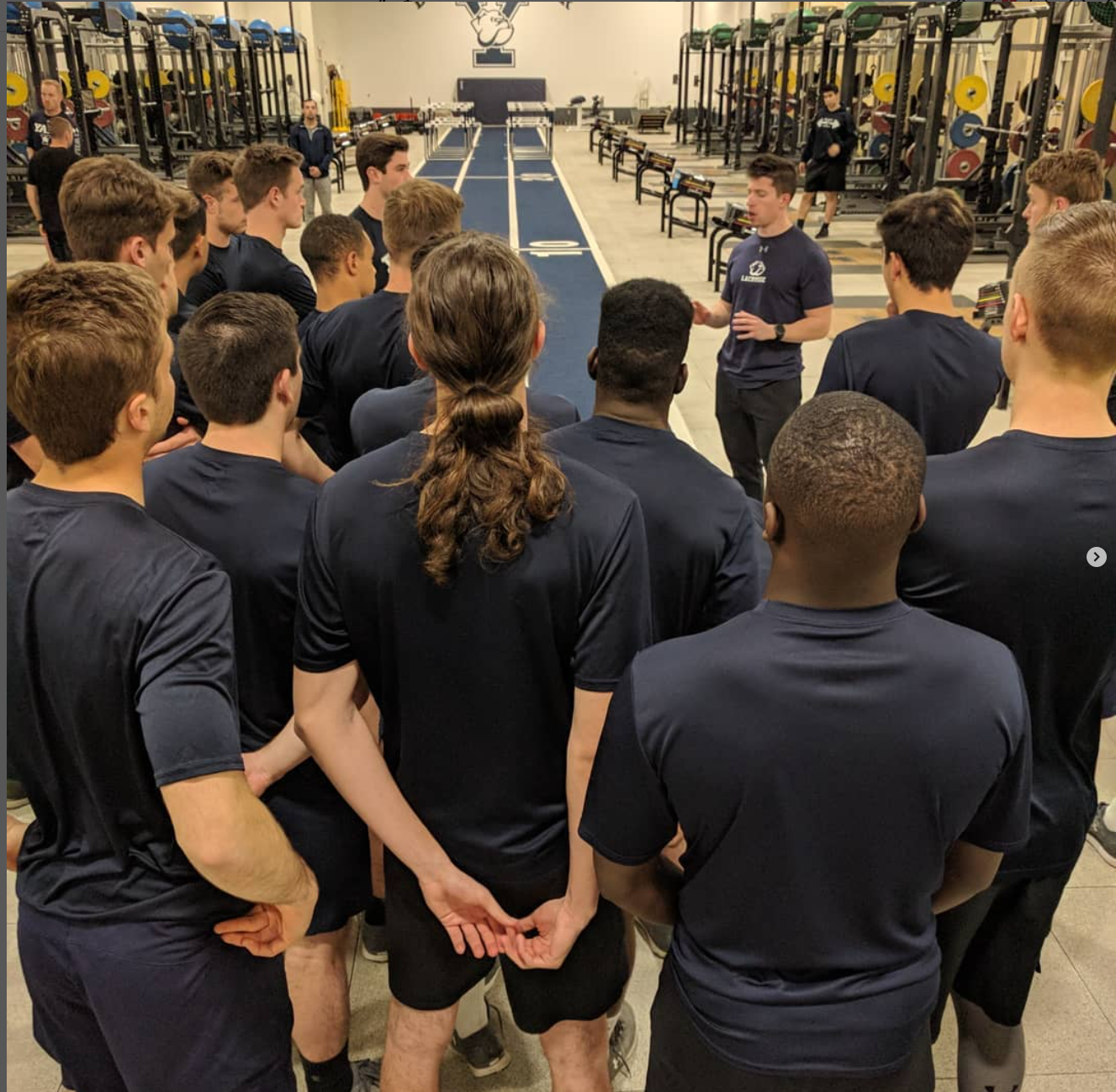 Jumping to Conclusions: Workout Selection Based on 1 Simple Test

Just jump. Seriously, jump your athletes. It takes little to no coaching, it can be done in 2-3 attempts. Jump. Take their best performed jump within a reasonable time frame and compare it to where they are that day. Select the theme of their day. Simple as that. Well, not quite simple but let me walk you through how this all can go down.

There’s two ways to compare, compare their best vertical against where their current vertical performance is.

This will give you the percentage change. Even more detailed and accurate, take their change in Power production.

Seyer’s Formula is a great way to calculate power production by only taking body weight and vertical jump height.

Now same principle as the percent change in vertical, compare their current best power output to their current power production for the day. Since this takes into account weight, a person that gains more weight but touches the same height on a vertical jump, is in theory producing more power. I argue this is the approach most should look to take, but for the sake of simplicity, I have run just the vertical jump comparison and seen results in being able to identify where and when an athlete should perform a certain style of lift.

When you run the equations to find where the athlete is given their most current best test, you will be left with a percentage number. Now depending on how far away from their testing number, will give you options that can best serve the athlete in their particular path to the goal looking to be achieved.

The above buckets are by no means hard coded, they have some flexibility and come with some nuance as it pertains to training age in particular. The younger the training age, the more they can be pushed on days. The older the training age, the more strict you may want to be when prescribing loads based on their fatigue level. Also, the styles to the right are not what you NEED to prescribe, more just general understanding of what they COULD handle. You probably wouldn’t want a high volume strength day, 2 days before a big game. That person could handle the load but the timing wouldn't make sense, as they’d most likely still be recovering or at the very least be considerably sore headed into competition. This is just the general framework, anything to the right of the buckets is what their bodies could perform at given their output.

Now that we know our buckets, let's talk about applications. I created a flow chart showing some non linear options based on the goals set out for one of the teams I worked with during their off-season. I will include those below. If the goal is power, depending on the bucket they perform at, and when their next game was, they had a certain number of options. If it was early in the week and they were high on output, they had the most ideal options available. If they were low in output and close to a scrimmage, my options to provide a workout were more limited in what they should do. On the sheet I had in front of me, I had what they did for their previous 2 workouts, and that gave me a better idea of what that person should aim for that day as their ideal.

In the flow charts above, people had different goals. This would have been the goals for the soccer team depending on where that athlete was going into the second half of the off season. They started playing spring games and some athletes were strong enough and needed to focus on higher end velocity training. Some were not at their strength metric goals and needed to focus on building up more. They could flex out of the strength group and into the power group if they hit their numbers through the second half. The power group needed at least one exposure at 80% every 3 weeks, so I needed to plan for that. But you can see there's multiple options across the board as to what can be prescribed.

Some of these workouts had autoregulatory rep schemes that allowed me to adjust maxes on a regular basis. Sometimes athletes would only be able to hit a volume style workout early in the week and by their next lift, they would need a more movement/recovery style. So this left me without any hard evidence that their ability increased. Well if they achieved a certain number of reps at a given percentage during a week's time, I would assume, from a linear progression standpoint, they could safely add at least 1-5% onto their training max for the following week. The range is for training age type discretion, if they were advanced, 5% is a considerable jump, I would aim for a lower increase. This strategy gave me the ability to progress athletes’ volume on a regular basis without having to consistently test their maximum ability. Along with having volume check points during a week, if their power increased in their jump performance, I would alter loads for the following week as well. I had a consistent way to maintain that an athlete was progressing along throughout their time using this style.

Are they detraining? Or are they just run into the ground? The classic game. If an athlete is consistently showing less than 90% on a daily basis, you have to pump the brakes. There’s a very high chance they aren't getting worse, but they aren't going to improve moving at that same clip. So sometimes the best lift is no lift at all. I would regularly have athletes to the side either stretching, rolling, mini band/big band work, but no weights that day. Sometimes athletes get the sense that if they aren’t doing everything, they’re falling behind. Having their percent change in front of me to show to them, allowed me to have conversations with them about their progress or inability to progress if they don’t properly recover. So those days were some of the most important days I would tell them. Now, if they are consistently bagging the jump to get out of lifting, well that’s a different conversation.

The Logistics and Operations

Now this is all great, but how to run this with just yourself, a vert stand and 25 athletes. You need to have some trust with your athletes and vice versa. I would have athletes select a warm up style progression to go through and as they were going through that, athletes would be selected to test their vertical, report their score to me, and go back to their warm up progression. All in all, it should take about 5-10 minutes. 10 Minutes the first few times to figure it all out, 5 minutes once everyone gets accustomed to the process. We were able to get a room of 45 athletes done in about 8 minutes. That was with 5 vert stands and 2 coaches and 5-8 interns on the floor. Does this approach take time in a team setting? Yes. But the return can be vast.

Bringing it All Together

Interestingly enough, using this style of programming in season led to some pretty remarkable results. We were able to add muscle in season to some of our developmental players because we knew how far we could push them and when to lay off to ensure they had a consistent pattern of recovery. If you have the capacity to train in this fashion, you can truly start to see some amazing results as well.

Previous Story
← From the GA's Desk: A 4-Step Model to Choosing the Right Job
Next Story
4 Steps to Setting Your Organization's Communication Strategy →