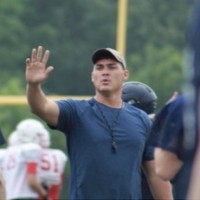 Creating a chemistry within the weight room is imperative in developing your particular sports programs.  While I have my standards and set beliefs in what I want a training session to look like I always visit with our sport coaches and incorporate what they want in a session from a cultural standpoint as well.

Often times this means me not doing exactly what I want 100% of the time but I think it is important to give them say and input because as the strength coach it is my job to be an extension of them.  Here are my 3 tips for building chemistry in the weight room:

Communication With The Sport Coach

Asking various sport coaches for their input is critical when building a relationship to work with their team and when you do this, you should try to blend in their ideas with your own methodology.

For example, I despise doing “finishers” at the end of workouts, I feel it is a waste of time and time could be much better spent doing something else within the session.  With that being said our Head Football Coach loves them and wants to do them, so in the football session we are going to do them.  I could get hung up on what is ultimately 5 minutes of time 1-2 times per week and sour a good relationship or just do a finisher that isn’t going to hurt the kids and continue to get the most out of their sessions on the other days.

Also while most sport coaches are going to say they want to get faster, build a better core, become more explosive, increase strength and increase vertical, it is still important to ask the question as to what they want out of their off-season program.  This gives them a say within the program and will help create buy-in from their athletes.

It is also important to show them your various plans for achieving these goals.  For example, a basketball coach may see their athletes doing hang cleans and think “how is that going to increase our vertical or explosiveness” explain to them the reasons for the particular exercises in many cases they simply just don’t understand the methods to what you are doing.

Build Trust With Your Athletes

It is also key to build trust within your players and that has to be a two-way street -- when you make a mistake as a strength and conditioning, professional own it and tell the kids you made a mistake.

In a recent session one of our volleyball girls had a towel on the bar during front squats because she did not like the way it felt on her collar bone, I asked her to take the towel off and perform it without it and she asked “why” I thought about it for a second and actually had no reason as to why she should.  I wanted her to do her front squats according to the reps and percentages/bar speed and she was doing those, the towel was harming her in no way and not hampering her movement in any way so I simply told her “I don’t have a reason, you're right”.

There is no need to run the weight room from a pedestal. Share and be honest about your mistakes and your athletes buy-in will increase tenfold.  As strength coaches we often pass blame to the athletes when in most cases it is often our fault.  As a professional I say “I did a terrible job coaching you on that” more than I will ever say “you didn’t listen to what you were told”.

It is also important to have a short memory and not carry over what happened in a previous session into the next session.  Last season we had an athlete who would simply un-rack the bar, stand in place for several seconds and then rack it again, never doing one rep of his squats.  Ultimately after watching him do this multiple times, I called him out at the end of the day accordingly.  However, I never let this carry over to the next day and now this young man is one of our hardest workers. Call your athletes out when it's needed but never hold it against them in future sessions.

I hate it when I hear coaches say “athletes just don’t work as hard as they used to”.  I think that could not be further from the truth, however I do think what motivates athletes has changed.  Athletes today want to know why they are doing something more than ever - not just because “Coach said so”.  Athletes today also want to show the world that they are in fact working hard in many cases often through various means of social media.

Use this to your advantage as a coach and utilize social media as a way to showcase your athletes and show-off what they are doing.  If you don’t want to do it yourself appoint someone on staff to do so.  A simple twitter shout out or post of them on your IG story can go a long way in increasing their motivation in a particular session.

You also need to always let your athletes know that you care and understand where they are coming from. There are many cases where we may take things for granted that we have access to and they may not.  I will never forget in my first strength and conditioning job I was berating a kid for not making his nutrition a priority and always being lethargic and cramping out during our warm ups.

I went on a tangent about how if you make drinking water and nutrition a priority then you will not cramp. This young man left our training sessions, went to work until ten at night and went home to a house with no running water and no electricity in many cases.  I have never felt as low as I did as when I was berating him for not drinking water and him simply informing me that “I CANT DRINK WATER WE DON’T HAVE ANY”.  I will never forget that moment as a coach and for him I am extremely thankful.

As a strength coach at the High School level you have to wear many hats aside from just being the strength and conditioning coach.  We often times have to be a tutor of various subjects, bus driver, team nutritionist (if qualified), teacher and other various titles.  Use these times to build relationships with your athletes as well, uphold the same standards in these other roles as you do in the weight room, and provide a measure of consistency that your athletes can learn from.

Previous Story
← 5 Ways To Add Variety To At-Home Training
Next Story
No Equipment? No Problem. →

From the GA's Desk: 3 Steps to Building a Culture of Belief